OSOYOOS, BRITISH COLUMBIA — After years of trying, the winery saw its 2016 Qwam Qwmt Chardonnay rank among the leading wines in an event that featured 679 entries from 39 countries. There were 52 gold-medal winners in total; the top two entrants — Liquidity Wines’ Reserve Chardonnay and Kalala Organic Estate Winery’s Chardonnay Icewine — were also from the Okanagan Valley. For NK’Mip Cellars, the gold medal is just the latest accolade for an operation that has become used to notoriety.

The enterprise grew from a curiosity as the first Aboriginal-owned and -operated winery in North America to what is undisputedly one of Canada’s finest winemaking brands. In 2016, it was named Intervin Canadian Winery of the Year, and has earned numerous top five honours during its nearly two decades of existence. Hall credits consistency in all aspects of the winemaking process — including in personnel — for NK’Mip’s success.

“It’s good to have recognition and assurance that we are doing good work. This is about consistency. We have three winemakers who have been working together for 15 years and that’s nearly unheard of in this industry. That familiarity allows us to shoot ideas off each other constantly and we also have different approaches to winemaking, so when we collaborate we’re each bringing a different perspective to the process,” says Hall, who is an Indigenous winemaker from the Osoyoos Indian Band (OIB), which owns NK’Mip Cellars in partnership with Arterra Wines Canada. “Over time, you build a database in your mind on how you sculpt and craft your wines. That’s where we’re at now. We know based on the type of season we’ve had and our past experience what the wine is going to be like before we even begin the process of putting it in the barrel.”

NK’Mip Cellars produces 18,000 cases of wine a year, remaining a boutique operation. Hall and Randy Picton are the primary winemakers and Aaron Crey, who is a member of the Stó:lō Nation near Chilliwack, is the supervisor of cellar operations. Together, they have gained a deep understanding of their line of products, their grapes, and the terroir of the South Okanagan.

Visitors to NK’Mip Cellars have the opportunity for an education themselves through an immersive walk through the winery’s processes and the Indigenous culture of the region. The tasting room and cellar are next to Spirit Ridge, a luxury resort that is the first property in Canada to join The Unbound Collection by Hyatt – marketed as a “a global collection of unique and story-worthy stay experiences.” Spirit Ridge is in an ideal location for exploring the wine culture of the South Okanagan. The hotel includes spacious units, family-friendly amenities as well as spa facilities and a full-service restaurant. A few steps away is the NK’Mip Desert Cultural Centre, where the Indigenous community honours its past and showcases its heritage with artifacts and storytelling.

In partnership with Arterra, NK’Mip has created one of the most unique wine experiences in Canada. Its tasting room is decorated with OIB symbols. Beneath it is the on-site barrel room where special dinners and other activities take place amid the wines being aged. The indulgences include tasting experiences that showcase more than just NK’Mip’s wines. The Perfect Union tasting includes wines paired with local cheeses and served in the NK’Mip cellar. In the Land to Legacy Tour, visitors can learn about the full scope of the winemaking process, sample six of NK’Mip’s wines, including its Riesling Icewine, and tour the winery’s facilities before or after visiting the NK’Mip Desert Cultural Centre.

While the tasting room and its patio overlooks vineyards and Lake Osoyoos, most of the grapes used in the NK’Mip wines are found in Oliver along the Black Sage Bench, considered the premier viticulture area in the nation. Sam Baptiste, a former chief of the OIB, was among the Indigenous workers who cleared the land for vineyard production decades ago. He was in high school in 1968 when he picked rocks from the ground and then took on the early chores of establishing a vineyard: pruning grapevines, pounding posts into the ground, and putting in anchors to keep them steady.

“We still handpick. We’ll have up to 80 people in one day picking, just like we’ve always done,” says Baptiste, the general manager at NK’Mip Vineyards in Oliver, which is wholly owned by the OIB. The earliest grapes were sold to other wineries in the Okanagan before the OIB elders decided to get into the winemaking business themselves.

After those years of effort and diligence, the NK’Mip name — which means “Bottomland” in recognition of the location at the southern tip of Lake Osoyoos — has established itself as an esteemed label.

“People have come to trust our brand,” Hall says. “That’s largely because they know what to expect when they get a bottle from us. That goes back to having 15 years of trial and error, of learning what works, of having consistency in our label. In the end, it’s what we’re after.”

Location: 1400 Rancher Creek Road, Osoyoos, BC
Website: www.nkmipcellars.com
Telephone: 250-495-2985
Wine-tasting Experiences: The Perfect Union wine-and-cheese tasting costs $25 per person and is an excellent way to learn about NK’Mip’s wines and the local cheeses available in the valley. Also, there are standard tastings that include a sample of five wines for a fee of $5 or a sample of Riesling Icewine for $3 (standard tasting fees are waived with the purchase of a bottle). 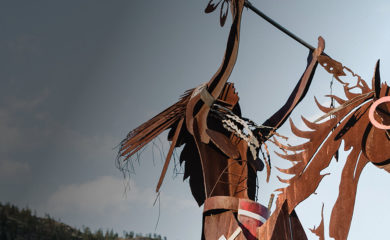 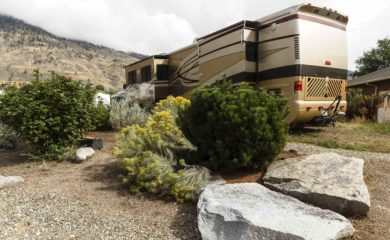 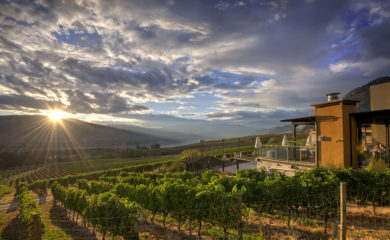 Spirit Ridge Sets the Mood for Romance in Osoyoos

The luxury resort on Lake Osoyoos invites couples to soak in the relaxing Okanagan sun...